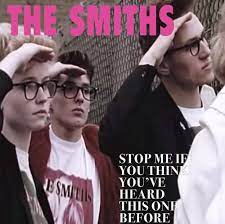 Song #488: Stop Me If You’ve Heard This One Before by The Smiths.

The Smiths were formed in the same Manchester music scene as discussed in previous posts about The Happy Mondays, as well as, the band, James. However, regardless of the success of either of those groups, or of any other band that came out of Manchester, The Smiths were, by far, the biggest and most influential act of them all. In fact, in a recent poll conducted to see who people thought were the biggest bands in UK history, The Smiths came in at #6. The only bands in front of them were The Beatles, The Rolling Stones, Radiohead, Pink FLoyd and Led Zeppelin. The Smiths finished ahead of such legendary bands as Queen, The Who, The Kinks and many others.

The funny thing about this is that the numbers don’t back up the level of adoration and esteem in which the band is held by so many. The Smiths were a band for only five years. They produced only four albums. They never had a number one song nor a gold record. In fact, their biggest and most recognizable hit, “How Soon Is Now?” was actually first released as a “B-side” and only ever gained traction as a single of its own by word-of-mouth from fans. So, what is it, then, about The Smiths that has caused them to leave such a lasting impact on the modern music scene in the UK and around the world?

At their core, The Beatles had Lennon and McCartney, The Stones had Keef and Mick, The Smiths had Morrissey and Johnny Marr. Morrissey (whose first name was Stephen but, who only went by his surname) was the lead singer and chief lyricist. Johnny Marr was the lead guitar player and arranged all of the music. They were friends who met in their late teens. They discovered that they shared similar tastes in music and that they had come from similar working class neighbourhoods in northern England. They had that level of chemistry and connection that all the great duos seem to have. The songs that they produced together were intelligent, humorous, cutting and relevant to a whole host of people who previously felt unseen and unheard. At first blush, The Smiths can come across as overly fussy and angst-driven but, when you look past the surface, what you find is a band who seemed to understand the real lives of real people almost better than anyone ever. The Smiths sing about everything from how it feels to be unemployed, to not having anything to wear to go out dancing, to feeling alone because you can’t trust the idea that someone could actually, truly love you.

The Smiths appear multiple times over the course of this Top 500 list so, there is plenty of time to get into finer details on Morrissey/Marr and the songs they wrote. For now, enjoy this song about love and trust and alcoholism. If you have never heard The Smiths before, get ready for one of the most unique voices to ever sing into a microphone. As well, enjoy the beautiful guitar work of Johnny Marr, as he weaves his music in and out and around Morrissey’s words. In this video, Morrissey is leading a group of Morrissey look-a-likes on bicycles. The video is actually filled with Smiths memorabilia and references. For instance, this song comes from their fourth album, “Strangeways, Here We Come”. Knowing that will explain some of the opening shots. The shirts they are wearing are all Smiths concert merchandise. Look out for Oscar Wilde, too. Apparently, he was a hero to Morrissey.

So, Ladies and Gentlemen, without further delay, here come The Smiths! Enjoy.

The link for the music video for Stop Me If You’ve Heard This One Before by The Smiths can be found here.

Thank you to Morrissey, Johnny Marr and the rest of the band for making music that was so important to so many people. To learn more about The Smiths, check out their website here.

Thank you to KEXP, as always, for providing the inspiration that resulted in the creation of this post.A link to their fabulous website can be found here.